One place you will regularly see a lot of cameras and camcorders is kids concerts and plays. Parents want to record the event for posterity and to show all the friends and relatives at parties and gatherings. This is an incredible thing to do. Those memories are so precious. There are a couple things that are very important to know or think about when at these events though. Some of it is about courtesy, and some is technical on getting photos of the event. Let's talk technical first. 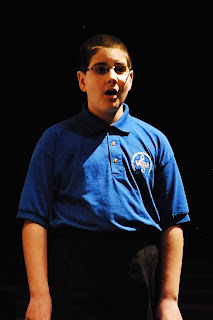 Camcorders don't usually have to many issues, well other than sound quality. At sometime down the road I will start putting up some posts on video and will start to address things like poor audio. But today I want to focus on still photography. At first it would seem like there is a lot of light coming from the stage. You will realize when you meter it with the camera though that there really is not much light. The first thing most people do is to turn on their flash. That would seem to make sense, except light falls of (techy geek alert) on an inverse square law. In other words, if you increase the distance from the light source by double you reduce your available light by three fourths (you have a quarter of the light you had closer). In non-geek speak, your flash is only good for a short distance, and the things closest to the camera will be a whole heck of a lot brighter than the things farther away. You should expect the on camera flash to only be a reliable light source for maybe somewhere in the area of 15 to 20 feet max, and less if you have a narrower aperture. If you have a speedlight on a hotshoe you will get more power, and might make 25 to 30 feet if you have a really powerful one. But most people are sitting at least 30 feet away from the stage. And the light is diffusing very fast.

There is one other problem with camera flash with a stage production, color temperature. All light has color. The light from a strobe is considered white, and the same as noon day sun. The lights used for stage productions are definitely NOT white (I am going to stay away from all the discussion of color temperature and how it is measured at this point). So if you use a strobe some things will look really odd compared to others as far as color is concerned. You will spend a lot of time try to rectify that in Photoshop afterwards.

The big challenge with photographing the kids is getting a high enough shutter speed so that they are not all blurry. You can use a slow shutter speed and a tripod if they are standing completely still, but how often will that happen? Using a prime lens or expensive zoom will help get a very wide aperture. That is one place to get some light and increase shutter speed, but it rarely is enough. And most people are using zoom lenses that have a max aperture somewhere between f/3.5 and f/5.6 usually. That is much slower than the f/1.8 from my favorite 50mm prime. With the prime lens I get a lot of light, but lose a lot of flexibility because I need to be very close to stage but yet not so close that people at the front of the stage are too close. So a zoom lens works better. But where do we go to get enough light to get decent shutter speed then? When I teach my classes in photography I always tell my students we have a final haven of last resort for light. It technically does not increase light, but the effect is the same. We can go do ISO. ISO "increases" the sensitivity of the image sensor so that it does not take as much light to get a photo. So we crank up the ISO and now we get a good shutter speed. But there is a negative to high ISO, digital noise. So the photo will not be as clean and crisp as it would be with a nice low ISO. You will get good light though, and not need a flash or get motion blur.

The shot above was shot at ISO 3200, which is the max my Nikon D80 will go to. I was able to get a shutter speed of 1/80th of a second at an aperture of f/5.6 for that. The photo is soft, and I needed to use some noise reduction in Aperture on the photo, but it is plenty good for the family album. And I was able to shoot all night long for other shots just like that. This is also why my next body will be the D7000. The D7000 will do amazing high ISO photography, much better than my D80. The Nikon D5100 has the same image sensor, so you can get high ISO for less money than the D7000 too. The D7000 will shoot comfortably at ISO 6400 (a whole stop faster than ISO 3200) and tops out at ISO 12,500. When people ask me for recommendations for cameras, I always ask them what they are going to shoot. If they are going to do a lot of kids programs or other low light photography, and want a DSLR, I will recommend either the Nikon D5100 or D7000. Nikon has just totally outdone themselves when they came out with these two cameras.

Now the little lecture on courtesy. We talked about how the flash really does not do much unless you are really close to the stage. Another thing that using a flash during a concert, ballet, or play will do is just annoy the living daylights out of your neighbors at the concert. There is nothing more disconcerting at a play or concert than to have a flash popping off every two minutes. It is even worse when you realize the gadget is doing nothing for the peoples photos. I would rather have someone talking than popping off a flash on a camera. I will say it is downright hilarious when I see people with speedlights (like at this concert) pointed up at a black 50 foot ceiling thinking they will get some sort of bounce flash effect. The 100 foot round trip for the light is crazy enough, and then you add in the lack of reflectivity of a black ceiling and there would be more light from a little pocket flashlight. Oh, and since we are on the topic of courtesy, make sure you turn off the focus assist light. That is the little red or green light that comes on when you press the shutter button half way down. Just like the strobe, it is not going to do anything other than annoy your neighbors. For focus there WILL be enough light from the stage. And if you are using a DSLR then you can always manual focus too.

I hope this helps everyone the next time they are at a presentation by their kids or grandkids. And I wish you good shooting.
Posted by Rusty at 1:43 PM