So last time I showed photos for a single utility light that I rigged up for putting on a traditional light stand and to use the umbrella holder to have an umbrella on the light. 500 watts of light. Sounds like a lot. But when you start shooting you will realize how very little it really is. You can get the lights in pairs.... AND already mounted on a tripod for you. It runs about $30 more or less for these. The set I had included a handle on the light bar. The light bar could come off the tripod and be used by itself. This is the best setup if you can find it. 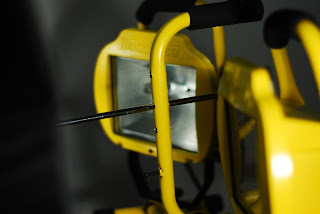 What I did was to drill three holes in the handle. I did three because I was not exactly sure where I would put the umbrella. I ended up using the middle one. Interestingly this was the first I drilled. The umbrella does not lock into place. I suppose I could put some sort of clamp on it. I tried to find like a rubber O ring that would slide snuggly over the umbrella post and then slide a second on the other side, but was not successful. I suppose it is out there. But the rig works pretty good, and supplies twice the light. I cannot angle the light up or down so it has to go level with the model. But it works at least. 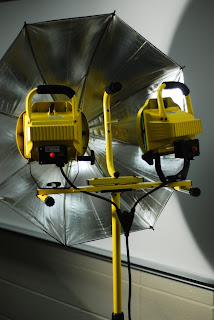 The thing is hot though. If your studio (or wherever you are shooting) runs on the cold side it won't take long for people to be plenty warm. If it runs on the warm side then you will be plenty hot later. I think the best place for a setup like this would be doing photo sessions of sleeping babies, or newborn shoots. This way you don't disturb the babies with sudden bright flashes of light. For sleeping babies the warm lights will probably keep them nice and comfy for the shoot and help them stay asleep. 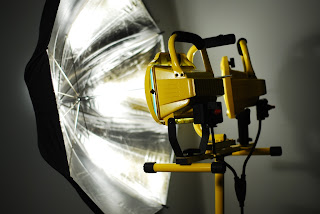 It also works good for times you want to play around with slower shutter and need continuous lighting for that. I use it in my photography classes for that purpose. It works pretty well. But I will tell you right now that it is not nearly as much light as you would expect it to be. Unless you are running a camera with a really wide aperture you just flat out will not get enough light to do decent shutter speed for like a portrait shoot or something. It works pretty decent with my 50mm f/1.8 lens, but shooting a kit lens is just a nightmare. Especially one of the 18-55 mm f/3.5-5.6 since at 5.6 you are just way to narrow an aperture. There are a number of good reasons to shoot primes in a portrait session though and this is just one of them.

Well this Friday I am going to post a Christmas wish list posting. I will put up some things that I think should be in just about anyones photography oriented Christmas (or Hanukkah) gift list. It will not be all inclusive, but will be a pretty good list anyway. So look forward to that. And then you can hint to friends and relatives to take a look at the blog. Maybe even say something like "he is spot on with that XXX item on the list" to help them realize which ones are the good choices for you.
Posted by Rusty at 7:06 PM No comments:

Sometimes people want to do studio shots of family or friends. The biggest challenge with doing studio shoots is lighting. Most people will go the route of strobe lights. These will either be AC powered lights or speedlights that are battery powered. These work well and supply a lot of light. The main challenge is that they are expensive. They also have the challenge that the light meter in the camera will not work with them. So they are a little tricky to learn to use.

The alternative is continuous light. There are very few really good options for photographers for inexpensive continuous light though. You will need a lot of light. But there is a very inexpensive option if you want to get just a little creative. Go to your local home improvement store like Home Depot or Lowes. Get the halogen utility lights. You can get a single light that will put out 500 watts of light for about $15 to $20 dollars. You can get duals that also include a nice tripod stand for just over $30 that will give you 1,000 watts of light. But you need to be able to mount them and affix umbrellas to help modify the light. We will look at the single 500 watt unit in this blog post. You will take the stand off the bottom of the light. Then you will get hold of one of the brass light adapter studs that will fit in an adapter on a light stand. Bolt it to the bracket at the bottom of the light. 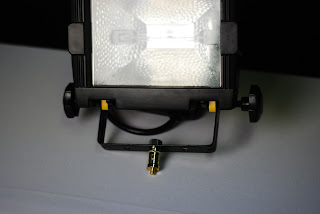 Once you get the stud on the bottom of the light it is ready to be put on the light stand. You will need to get hold of a light stand for about $20 and an umbrella bracket for another $17 from your local camera store or someplace light B&H Photo. You will also need an umbrella, either a white translucent or one of the opaque black back umbrellas with silver or gold reflective inside. 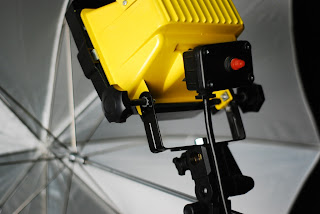 Now you have a nice 500 watt continuous light. It is a bit on the hot side, but it will give you a lot of light. You will most likely need to shoot at somewhere between ISO 400 and ISO 800 to get a reasonable shutter speed. If you are using a prime lens like the 50mm f/1.8 lens you will be able to get good shutter speed at ISO 400. 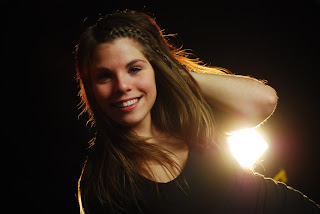 Now you can get some really nice studio shots like this one above. You can use the light meter in the camera. You will see what the shot will look like as far as lighting well before shooting the shot. And it will cost you a fraction of strobes. Next time we will look at the modification of the dual light setup.
Posted by Rusty at 8:27 PM No comments: