When high ISO is good

As photographers we are always looking for the perfect picture. A number of things make up the perfect picture. Composition is very important. Getting the story across is important. The wow factor is important (it is so cool to hear people go Oooo when they see one of my photos). Technical perfection in lighting and color and clarity are also part of the perfect picture. So one of the "rules" is to shoot very low ISO settings on the camera. We all know that as ISO increases so does grain/noise (grain in film - noise in digital). Interestingly grain sometimes can be very artistic. Noise on the other hand is almost always bad. So technology is not always a good thing. But that is a totally different philosophical discussion. So the question is, "if noise is bad and high ISO gives noise why do they put high ISO settings on cameras?", right? 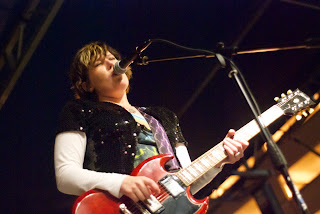 Well the answer is actually pretty simple. A high ISO gives you a chance to get photos that you otherwise would never be able to get. We want perfection, but sometimes it is unachievable. Maybe perfection is overrated. Life is not perfect. If our photos are to represent life then maybe perfect is not so perfect. Sorry, I am waxing philosophical again. Anyway, there are times where there simply is not enough light to get what you want/need in a photo. This epiphany came to me one day while reading one of my favorite photography books (one that every photographer should have BTW), Joe McNally's "The Moment it Clicks". It is one of the most unique photography books you will ever see. It is just plain fun to read for almost anyone. So there is one photo in the book that Joe took of Jason Robards. He talks about how the lighting was bad, the film was high ISO, but he only had the moment. So he got the shot. It is awesome. It is not perfect, but it is awesome. And more important he got the photo. 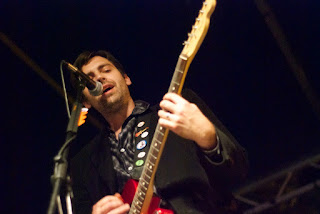 I live near Grand Rapids, MI and we have a now three year old arts competition called ArtPrize (held in the fall). This is an art competition for the rest of us. Much to the chagrin of the fancy art community all the artwork is judged by the common people that show up and walk around. It is a very populist event. You register and then can vote on what art you like the best. This year there are well over a thousand artists with items in the competition. Well I was walking around the other night enjoying ArtPrize. I had gone down with the camera club for a photo walk about. Near the end of the night I broke off and was just wandering. In one area there was a band playing on stage. They were actually very good BTW. Anyway, I so wanted to get photos of them, good photos. But the light was not what you would call conducive to high shutter speeds needed for very animated musicians. Even with my 50mm f/1.8 fast lens I could not get the shutter speed at lower ISOs. So I took my Nikon D80 and just cranked on that ISO setting. Ran it all the way up into the stratosphere (which is not nearly as high as a D7000 or D3, but it is what I had). 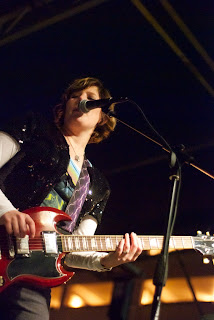 Now I am finally getting decent shutter speeds. Somewhere between 1/100 and 1/125 for most shots. I am a very brazen photographer. I will just get right in the mix and start shooting until someone kicks me out. So I got right to the edge of the stage and started to click away. It was a phenomenal time. I love music (good music - not things like RAP - of which I still doubt the music moniker). So they were playing awesome music, the muses were in the air doing their thing, and I was in photography heaven. And in the process I got awesome photos, not perfect photos, but awesome photos. 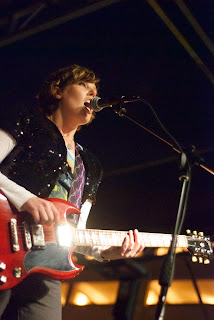 I thought at the time I had some good stuff (one of the advantages of digital over film - instant feedback), but you never know for sure until you get home and get the photos on the big screen on the computer. When I got home I was completely pleased. If you look at the full size image and start to pixel peek you can see the noise, but when you simply look at the photo, really just take it in as art, then it all just works. Just like Joe's photo of Jason Robards, I only had the moment and the environment I was handed. I was able to throw caution to the wind and make art that works. 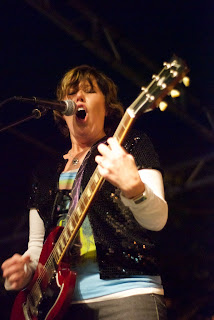 I am regularly drooling over the Nikon D7000 (and in my wildest dreams a D700 or D3), but raising a family and not doing photography as a professional (not yet anyway), I settle for my D80. I got my lowly D80 used off from eBay. So it is even second hand to boot. but it is a glorious camera. The reason I mention this is that so many people think it is all about the camera. Yes the camera does make a difference at some level, but the best camera is the one you have with you. Most of what makes a photo awesome are things like composition and lighting. 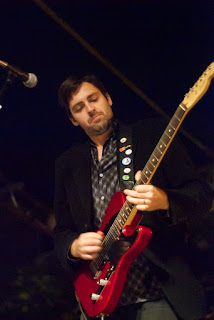 Could these photos of been better with a different body? Maybe. A D7000, or even the lowly D5100 (which has the same image sensor as the D7000) would have had less noise. But I had what I had. Some people would have simply not taken the photos because they would have been scared to run up to such a high ISO. I see people paralyzed by "the rules" and will not take risks. In the process, or in the misguided idea that only perfection works, they miss great photographs. This goes right along with don't be real quick to delete photos based on the looks of them on the tiny little screen on the camera. It lies. I have looked at photos I thought were sucky on the camera, but on the computer they were really good, sometimes with a little salvage work, but good. I have seen photos I thought were awesome on the camera but then on the big screen they were totally destined for the trash bin.

So in conclusion, the time to use high ISO is when there simply is not enough light. You might still throw the photo away, but then again, you might end up putting it on your wall. I can promise you that one or two of these will get printed and hung on the wall. Now I just need to figure out which I like best. Either that or I need to win the lotto so I can buy a really huge house with lots of walls to hang photos on.
Posted by Rusty at 7:36 AM