Creativity and the Lensbaby

Recently I got a Lensbaby lens. I picked the least expensive model, the Muse. I will say it is a very interesting little lens. The thing with the Lensbaby is that it does not give you typical photos at all. The lens has different optics that can drop into the main lens body. The double optic is the clearest of the lenses. And from there you have the single optic, the plastic, etc. Each one is softer. They also have a sweet spot of focus and the rest of the image falls off into interesting blurs. This is not blur like out of the depth of field blur. This is much more artistic than that. You get very unusual photos with it. I think I like the lens a lot, but it is a temperamental bugger too. Here is a shot I took with the lens. 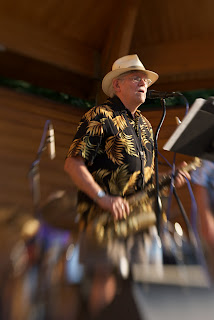 Notice how the person is in focus and a lot of the rest of the picture is blurred. Even the sax, which is in the same focus plane as the person is out of focus. This is the idea of the sweet spot. The interesting challenge with the Muse is that you have an accordion rubber tube that you need to squeeze to compress to focus. And you also have to tilt the thing around with your fingers to get the sweet spot in the right place in the frame. And while holding it in place you then need to depress the shutter without losing the setup. It is quite the gymnastic stunt with your hands to pull it off. Sometimes it does not work as you would want, getting things not really where you want them. 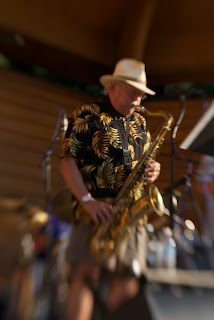 Here instead of the man's face being in focus I slipped and got the shirt. Not quite what I had in mind. I suppose in some respect it is not a bad photo, but totally not my goal. Some of the photos were even worse. I will say that it takes a lot of practice to get the Muse to work the way you want it to. I am hoping to get the Composer at some point, hoping to have more control over it than I do with the Muse. We will see. But I will say that when everything clicks and you get the shot you want it is just a stupendous thing. 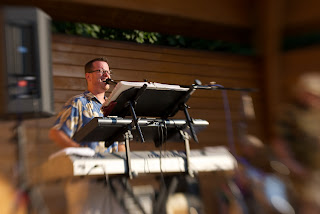 So I know I will keep shooting with it and see if I can get to the point of being more consistent. The Muse is nice in the sense that it is very spontaneous. So for something like a concert that is always moving there is a fluidity to using it that works really well. Recently another photographer said to me "one thing nice about the Muse is that you will NEVER get that same shot again... ever!" and I suppose she was right. There really is never a way to ever truly duplicate the shot exactly the same way a second time.
Posted by Rusty at 8:47 PM