The last post was all about using long shutter speed for doing night time shots and the need to use a remote trigger for the shutter. Well that and a tripod of course. Well this last weekend I had another chance for doing some photography that involves long shutter speeds. Where I lived had a festival that ended with fireworks.  I posted the photos on one of the email groups I am on for photography. I got responses asking how to set the camera for doing fireworks. Well I think that fireworks make for a great followup topic on long shutter speed. 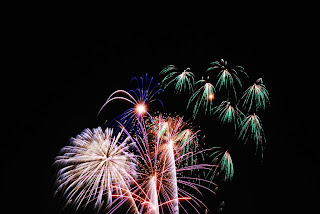 Here is the thing with fireworks. You will use a long shutter speed to get a beautiful shot of them. There is not a single setting that works best. The longer the shot the more fireworks explosions that will be in the shot. Of course fireworks are pretty random since you never know for sure when they will shoot them off (unless you are running the display). So there is a bit of fun randomness in your photos that you will not be able to predict. But in general you will want a shutter speed somewhere between 15 and 25 seconds usually. Try different lengths and see what you get for the photos.

Of course you will want to use either a timer or a remote trigger to open the shutter. If you don't then you will end up with blurry fireworks just like our blurry cityscape in the last post. I don't have a remote trigger yet so I had to go with the 2 second timer. I would depress the shutter when I heard the poof of the mortar going off launching the firework skyward. It was pretty good timing actually. 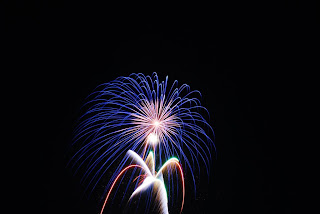 For the ISO I was running 100. That will give the best shot with the least amount of digital noise. Interestingly fireworks are pretty bright. The background is not, but that is one of the beauty of it too right? So you can go with the slow ISO and be OK. Also I went with an aperture of f/8 since that is pretty close to the sweet spot for most lenses where you get the least problems with any lens design issues. The closer you get to either full open or full close the lens could tend toward some unwanted little "features" that affect the photo. And then for the focus you will obviously use manual focus and set the focus to the most distant focus on the lens. As far as lens selection, I was using my Tamron 28-80mm lens and had it set to 28. I kind of wished I had an 18mm lens that night. There were some times where the firework was outside of the field of view. Most of the shots were inside pretty well though so it all worked out anyway.

I think that the most interesting thing about shooting fireworks is that the first thought for camera settings is not what actually would be correct. Most of the time people think since it is dark they want wide open aperture and high ISO. They also figure since fireworks are so far off that they will want a telephoto lens. All of these are of course incorrect. And we have already talked about how a tripod is not enough with long shutter speeds, but that you also need to use some sort of remote triggering for your shutter. So see if there are any fireworks displays in your area and have a grand time shooting. Play with your shutter settings and see what you get for different settings. Hopefully they will shoot enough fireworks at one time to get something like the photo I call Fire Palms (below). 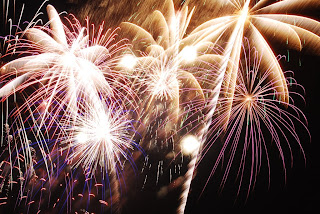