It is the details that matter

Sorry it has been so long since the last post. I have been very busy with the holidays and with doing a lot of shooting. I decided though to go to a couple photos I took just over a month ago. One of the things Grand Rapids is known for is the all volunteer Arts Festival that happens the first full weekend of June. I love going down, especially with my camera. Well my favorite thing is listening to the Jazz music. There was a gal that was singing on the last day. She was an awesome singer with great stage presence. 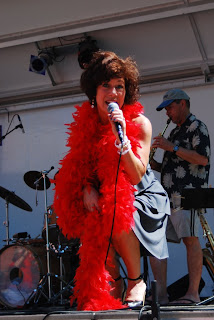 Well while she was singing on stage a bunch of people were dancing near the back of the audience area in an open area. One of them was incredible to watch. She was so fluid... like watching water flow effortlessly down a woodland brook. She was totally enjoying life and was completely immersed in the moment. I think she was with a group that were like a dance club or something. She danced with several of the guys in the same group. Anyway, I got a lot of nice shots of the dancing. As I was going through the photos and weeding out the non-keepers I noticed two shots taken one after the other. As I was looking at them to decide which to dump and which to keep the final criteria was a very minor detail. The first photo, the non-keeper (except it ended up on here) is this one. 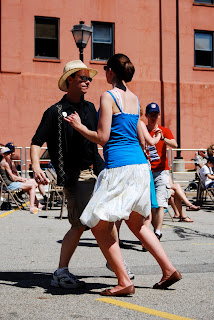 Not a bad photo. The frame is filled. I wish the other guy in the red in the background was not there, but to photoshop him out and make it look good would be a nightmare and a half. But then when I looked at the next photo... 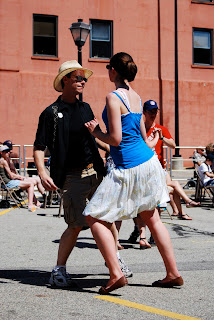 what I saw was motion in the photo. The pose is just a bit different, not much, just a little. But that little bit gives the real sense of motion to the photo. It does not look static like the first. It really makes the photo pop. It is the attention to detail that makes all the difference in the world. The guy in the red is still there. Oh well, it is not like I am entering this in a contest, or that it is for the Time magazine cover. But it does bug me when I look at it. Well if I wanted to do perfect it would have been in a studio or some other controlled environment, right? Of course right.
Posted by Rusty at 10:03 PM