This particular blog post is going to deal with photography of the past. I am currently in the middle of a project to scan literally thousands of family photos into the computer. I am digitizing all the prints, slides, and negatives for a number of reasons. The first is so that I can easily share them with family members. The second is to get some of the photos posted on line and maybe crowd source to get information on long lost information on ancestors of the past. The third is to archive the photos in a manner that is easy to back up and protect. Fourth, I will be able to use the photos in many other digital projects down the road. I might even make some of them into really cool holiday presents too. As I have been working on the beginnings of the project I have learned a number of things to make the project go better and easily store the information I want.

I am not going to go into details at this point as to what equipment you need. I will leave that to a future post. Currently I am doing prints that I don't have negatives or slides for. I am using a Lexmark all-in-one printer to scan in. I will talk more about this scanner and the future scanner I am planning on purchasing down the road. I will tell you that after much consideration, and talking to a great friend (thank you very much Kathy!!!) that I did finally come up with the best way to organize the photos on the hard drive. I created folders for each decade. Then I put all the photos from a particular decade into the associated folder. I thought about trying to organize by family member or family grouping, but there were just too many photos that had multiple families represented. Geography really did not make a lot of sense, and for the older photos often I did not have clear geographical information. I could often pinpoint the decade. And when I did not know it for sure I knew I was within one or two. At that point it gets me close enough, and if I get some information down the road from the Internet or other family members I can easily move the particular ones that I was off on.

Second, I had a number of photos with annotations on the back. At first I was going to add them in EXIF tags. But I did not really like that way a whole lot. Then I ran into some old photos that had annotations in the white margins of the photos. It did not take me long to realize that worked really well. I am using a Mac. On the Mac if you open up a photo in the built in Preview program one of the things you can do is annotate the photo. At first I typed the annotation right on the photo. Then I got wise. When I created the photo I would pull the crop lines such that I had a white space below the photo where I could write the information I wanted. Talk about handy. And if I want to create something with the photo without any writing on it I can just crop out the annotation area. 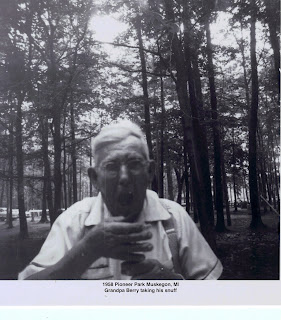 So here is a photo of my Great Grandpa Berry at Pioneer Park in 1958 taking his snuff. And since it is annotated at the bottom of the photo the information is there now for all the people I share the photo with. And years from now that information will not be lost. 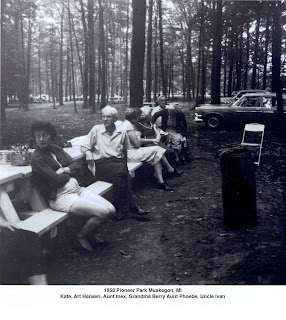 Here is a photo with a whole line of people. I put the line up in the annotation in the same order as the people in the photo. Or at least that is the order in the photo. It looks correct from the couple of people I have been able to identify. I am really curious about Uncle Ivan. I did not know I had an Uncle Ivan, and yet I see him in a lot of the photos. So when I go to the reunion next month I am hoping to get more information on him maybe.

The other thing in capturing these photos is that over time they had faded. So the photo of my Great Grandfather taking his snuff was looking like this. 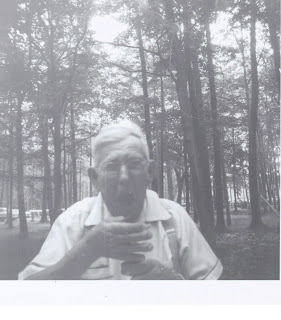 The nice thing about digitizing the photo was that I was able to easily bring back much of the lost detail in the photo. Now it is much nicer looking than the actual photo print I have. The photo that included Uncle Ivan? Well the original print looks like this.... 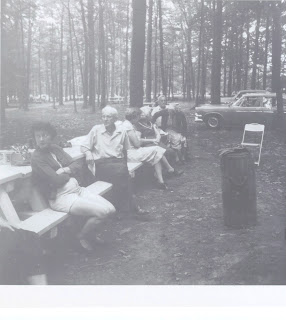 I also have one of Aunt Inez (she is in that group photo too) that looked like this originally. 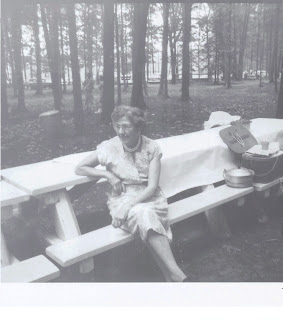 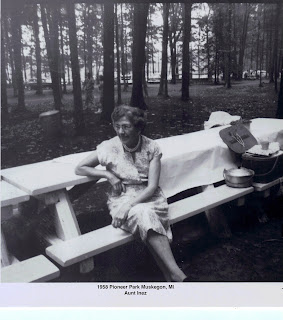 Much easier to see details. Restoring that detail is very easy actually. You will simply use the levels tool in Photoshop Elements (PSE), or other photoshop style editor. My problem here was I needed to bring up the blacks. Or would that be bring them down? Well make them more distinct. I know that I could probably get much more creative trying to bring back more detail, but with thousands to do it is just unrealistic to get to crazy with the detail. In those famous words.... "it is good enough." So I have something that really works well now. A good scan, a quick tweak in PSE. And some annotation in Preview. And now I have captured and saved a family memory. It can be put in genealogy programs, maybe printed on a coffee mug or post card, and saved off site to protect it.

If you have the original negatives you should scan from those instead of the prints. You will get a much better more clear capture. This is one thing to consider when looking at scanners (which we will talk about at some point). Also, the scanners that can do negatives can do slides as well. I need to get my scanner for that, but in the meantime I am working my way through the prints.

Oh, if you are using a Mac then try out the built in Image Capture program to scan the images in. It works WONDERFUL! You can even put multiple prints on the scanner and tell it to auto detect the different prints. Then you double check the crop lines, and have it scan in all of them at once. You can usually do between three and six prints at a time depending on the size of the print. Makes the work go quite fast. And I am scanning at 1200 DPI. I tried both 1200 and 2400. I found that I did not really gain much of anything in detail, and my files were twice the size (spelled getting huge).
Posted by Rusty at 8:50 PM No comments: