It has been a couple weeks since I posted last. Sorry, but life got a little in the way. In the meantime though I have been having fun with my new 50mm f/1.8 lens for my Nikon D80. I love the lens because of the extreme amount of light it lets in. I can do some great photos in natural light at really decent shutter speeds with nice low ISO settings. You would think that makes it a perfect lens. You will often hear people talk about a lens with a wide aperture as a fast lens because of the ability to suck in tons of light. Well the thing is that, for good or bad, with a wide open aperture you get a very shallow depth of field. Depth of field is one of those concepts that I find difficult to explain to students in class. It seems like it is a concept that is better demonstrated than explained. So I decided to take some photos that show depth of field differences at different aperture settings. 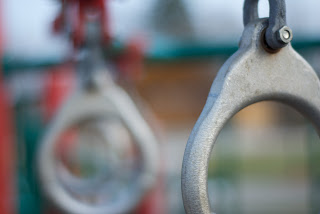 This is the first image. This is taken with a wide open f/1.8 aperture. At ISO 100 I was able to take this shot with a shutter speed of 1/1250 of a second. That is a very fast shutter speed. If you want to stop action that speed will do it for most things. Notice that the only thing in focus is the ring at the very front. Everything behind is blurred. This is because it is out of the range for the depth of field. This is how you get that wonderful effect in portraits where the subject is in focus and everything else is not. Something like this photo. 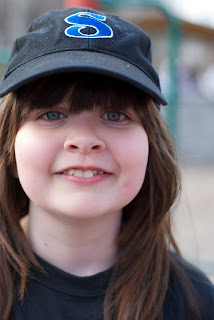 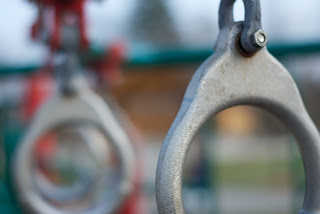 This photo is taken with an aperture of f/2.5. So you can tell right away that stuff is starting to get more in focus. It is not really in focus yet, but closer. My shutter speed is 1/800 to get the same exposure. As I stop down I have to slow the shutter speed the same amount. Cameras are calibrated in the same increments for aperture, shutter, and ISO. In most modern cameras it is in third stops. Sometimes you might find that you have to stop down a little bit simply because you have so much bright light that at the widest open aperture you cannot get a fast enough shutter and slow enough ISO to get a good shot. You can also use a neutral density filter to reduce light and still keep a wider open aperture too. But that is a different blog post. So I can get even more in focus with a shot like this. 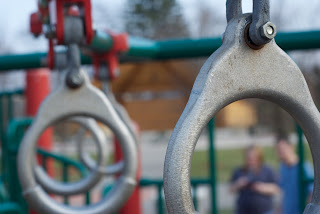 Now you can clearly make out the bars on the play set in the background. You can also tell that there are some people behind the play set. You are able to start to make out the windows in the building in the background. This shot is at f/7.1 and 1/100 a sec shutter. So the shutter speed is still good enough for handholding the camera, but if you have someone moving fast they will probably start to blur. Notice your eyes have a number of different places to travel now too. Not much is in perfect focus, but much is more well defined. 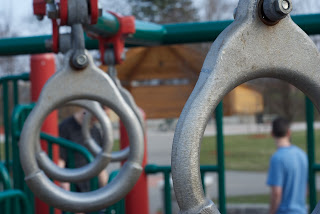 Now we have a shot where a lot is in focus. The background is a little blurry, but you can easily make everything out. If the people were facing the camera we could probably even make out who they were. We are now at f/13 and 1/30 of a second and still at ISO 100. I could increase my ISO now to get a little more speed from the shutter. But, of course, we would eventually start getting digital noise in the shot.