Sometimes it is fun to just experiment

I have an Android phone. It has a pretty nice camera on it. I recently purchased a way fun program called CameraFun. The application has a lot of really cool filters built in. You can take the photo with special effects at the time you take it. It is kind of like a version of PhotoBooth that you get to carry around with you. So I have started to take some photos and just have a little fun with it. 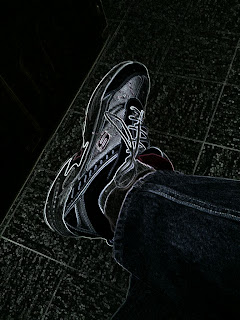 One of the first photos I took was my foot. Not the most exciting subject, but for some reason I just really liked the way it looked. Kind of artsy. Besides I think my athletic shoes look really cool this way. Wish I could get them to look like this in real life. 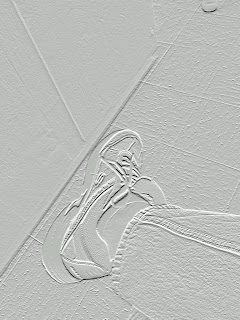 I did the same subject matter with embossed instead of neon. Totally not nearly as cool. It is actually a pretty boring shot. I think that if i printed it large it might be nicer, but it does not really blow my socks off (hahahaha). I like the out there type of look often. And I think that is why I don't like the embossed. Some others really liked it though. This shows how photography is an art and not a science. It is so up to interpretation. 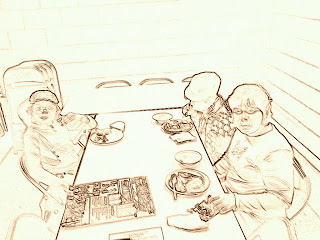 Next I tried the sepia sketch feature. I like the basic concept, but there is a certain lack of detail. I have a feeling if I set up the photo with better lighting and not so busy that it would look even better. In thinking about that, I am thinking of setting up an actual photo shoot with this camera and application. It would be interesting to see what I would get if I was not just walking around shooting photos. 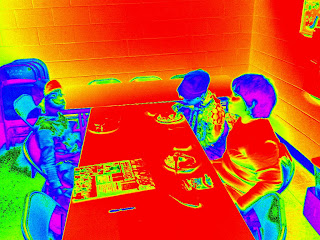 The kids really liked this photo. The filter is called thermal. I am not sure exactly how it is done, but I have a feeling it is not about actual thermal detection. Again, there is a certain lack of detail in the photo. If I do a formal photo shoot with this app I will need to make sure to do thermal as part of it. This is a fun one with kids though. I should try it outside on a sunny day at some time too. 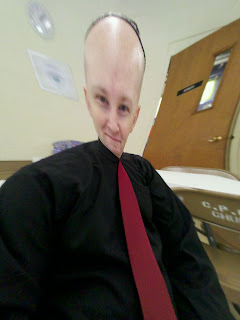 Here is an interesting shot. When I took it I immediately thought SciFi movie. He looked like some sort of alien. Wonder how I could do this in a video camera for a movie. The only challenge is that the background warps as well. Oh well... it was a great idea for a moment. 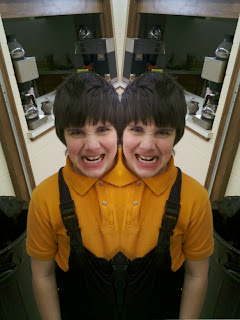 How about a two headed monster? I think with a little bit of work with the clothing, and doing it where I could replace the background easily I could make this one work out really cool. The more I type up this blog posting and look at these photos the more I think I am needing to take the phone into a studio setting to do some of this and see how creative I can get. 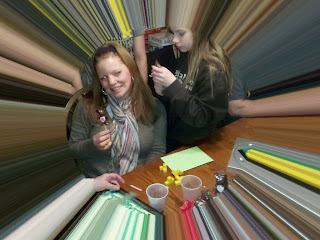 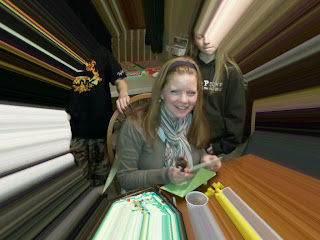 Here are two photos I took at a birthday party. I love the effect here! These both could easily end up on the wall printed and framed. I am not sure if I like the top or bottom one. On the top one though I think I want to take it into photoshop and pull that hand out that is on the lower left of the clear area at the edge of the table. It would be a fairly easy fix. And her right eye has some sort of odd little glare that needs to be touched up. The bottom one is pretty solid.

The one challenge I found with the phone and this application is that it takes so long after hitting the shutter button for it to focus up and shoot the photo. I had a lot of times that I lost the shot because the camera took too long. But it was way fun. 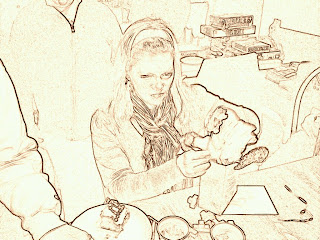 Here is one last shot from the party. It is another sepia sketch. Again, it lacks definition and is too cluttered. So this seems to be a filter that only works for shots that are well lit with a lot of definition on the subject.

I have pretty much talked myself into doing an actual studio shoot, or staged photo shoot outside with the phone to see what I get. I love some of the effects for quick photos, and the kids absolutely love them. I am going to get a couple printed so I can see what they look like big as life.
Posted by Rusty at 7:11 AM