You don't need a monster camera...

Many times when you get on photography blogs or discussion forums you get people that go on and on and on about how you need that $2,000 or $4,000 super triple monkey professional camera with a $1,500 "fast" expensive lens to be able to do real photography. Don't get me wrong, those cameras have their place. I am sure that professional photographers like Joe McNally really do have a need for a Nikon D3 camera. I also know that I don't need that. Not only that, but I know most people don't. I will even venture to say that a lot of people that purchase the entry level DSLR cameras would actually be much better suited to get a nice bridge or superzoom camera. If you are looking for an awesome walk around camera that can do just about anything fairly decently then the bridge cameras are your ticket. And since they look a lot like a DSLR a lot of people think you are shooting with a serious expensive camera.

I got started in doing more serious camera work with a Fujifilm S5200 camera. Now remember this is still a hobby for me, so serious camera work for me is much different than Joe McNally or Gavin Hoey. But I still got some seriously cool photos with that camera. One of the places I took cool photos was at a minor league hockey game here in Michigan. I was sitting in the nosebleed seats at the very top of the arena. I had to use natural light. I was very pleased with what I got. 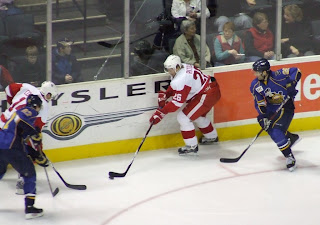 Here is a shot that was about as far away as they could be. You can really see them. And I was able to stop action with a fast enough shutter. 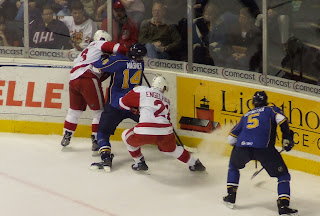 I love this because you can see the fountain of ice coming off the skate. It really shows the intensity. Oh I suppose the elbow that the one guy is getting in the side of the head helps a little with intensity too. Well it is hockey after all. Then sometimes you just get photos that are funny. This guy was just about ready to dump right onto the ice. And the moment is captured for all eternity in cyberspace now. All these photos from a camera that was like $250 brand new. It had a 10x optical lens on it. It actually did some pretty awesome macro photography too. 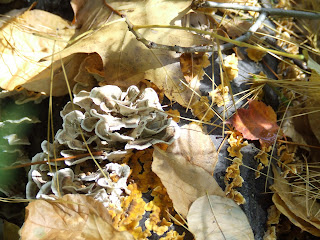 I love the colors and shading of this shot. A wonderful autumn shot. It is funny that I came back like three minutes later to try to get one more shot of the same thing, but by then the sun had moved enough that the shot was gone.

I also got an awesome shot of my son in Boy Scout summer camp at the campfire. I told him to hold perfectly still and took the photo on manual (yes the camera could do full manual) and a shutter speed of 30 seconds in duration. This allowed for a natural light photo. It also meant that I got some awesome wispy sparks in the photo too. 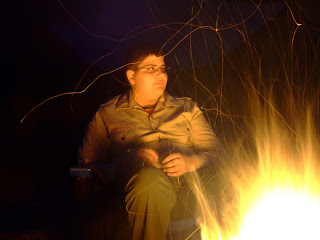 Again, this was all with a bridge camera. I did not need an expensive DSLR or a bunch of different expensive lenses to get these shots. And the camera ran on just AA batteries. So if I suddenly found I was running out of power I could just grab a couple more batteries. Here is a final shot. One I got of some of the family while we were walking in the woods. I need to take and get this one blown up, framed, and hung on a wall in the house. 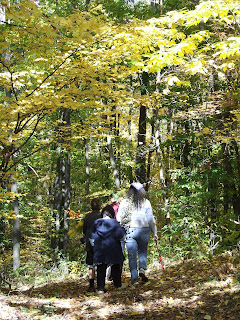