Getting artsy with photos

If you read any photography discussion forums you will eventually run into arguments over using Photoshop (I use Photoshop in the more general term that could also include the GIMP, PaintShop Pro, and other photo editors) on photos or if you are suppose to just use the photos as they came out of the camera. People will argue violently on both sides of using Photoshop. The point of this posting of mine is not to contribute to that argument. It is more to show what can be done with photos and how I have found photo editors beneficial for me. My point is that I approach photography as an art form. I use Photoshop no different than using something like different paint brushs on a canvas. The ultimate goal is to create art that I find pleasing. If I was a photojournalist then I would be very hesitant to utilize anything that would alter what I shot in trying to capture a moment as a way to report what is happening.

In my recent shoot with Sarah and Charlie I got some photos that were pretty close to what I wanted. It was more difficult for me because I was trying to teach a class at the same time. I had set up the shoot primarily for the benefit of the students. So I felt I should not really bug in on the creative work they were doing. I did get some pretty good photos that night though. 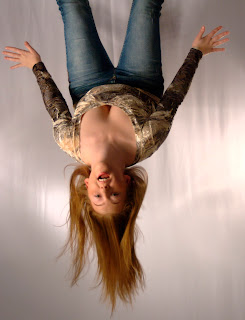 This one was originally Sarah's idea. This is something that makes her fun to shoot. She comes up with ideas that I had not even thought about. In the shot she was flipping her hair up. I inverted the photo to make it look like she was hanging upside down. I thought it looked a little better that way. 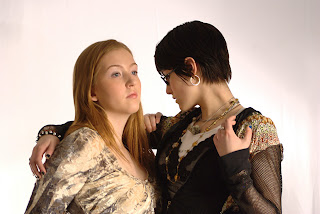 Here is one of my favs of both Charlie and Sarah. This is the color version. I love the photo for so many reasons. I was really torn about the coloring in it though. The lighting was not quite right and when I brightened it in GIMP it seemed to get patchy. So I thought about how it would look as a black and white photo. It already has a fairly artsy look to it, and I was thinking that the black and white would just make it more exotic. 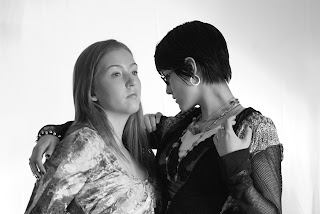 I am still really torn which one I like better. But I will say I think that black and white has the more artsy look typically. 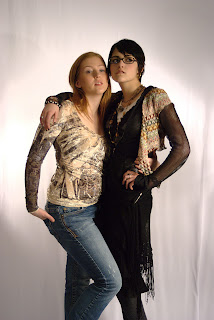 Here is another of Sarah and Charlie. I loved this video. I think that the gradient on the back drop really works for this photo. Again, I wondered if B&W would increase the artsy look of the photo. 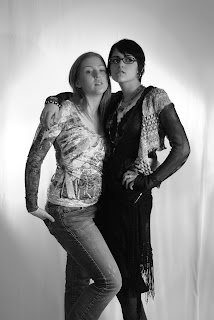 I also decided to enhance the sort of vignette lighting around them, making the edges of the photo darker. I love that look, and I think that once I get this one printed as a larger print it will be a nice addition to the wall somewhere.

I know that not everyone will want to take the time or have the philosophical desire to photoshop the pictures, but if you do you can really enhance the look and get something more artistic than you last photos. Good luck with your photos and let us know if you edit them or use just what comes out of the camera untouched.
Posted by Rusty at 9:12 PM